If you know that either you or your business has an fx requirement that involves the short term need for one currency and then trading this back to your base currency then an FX swap could be the right hedging tool for you. Here we explain FX swaps in detail, including some working examples, but first let’s provide a snapshot on  an FX swap vs FX forward so you know when you should be using the right tool for you or your business.

Below you can find a finite list of all the companies we covered and give access to currency forwards and swaps for private and corporate clients:

What is an FX swap?

A foregin exchange swap involves two transactions – a purchase and sale of identical amounts of one currency for another – entered into at the same time.

FX swaps are one of the fastest growing FX instruments in use today, accounting for 49% of daily FX volumes. This could perhaps be a reflection of the current risk appetite in the market – buyers wanting to completely remove exchange rate risk if they know they will require their base currency again in the future.

A business headquartered in America also sells its services in the EU and is looking to trade EUR to USD to finance its core American business. But in two weeks time the firm knows it will require EUR again to pay European suppliers. The company could make a trade on the spot to buy USD now, and then change USD back to EUR on the spot in two weeks time (option 2 in our diagram below). However, in these two weeks the euro could appreciate against the dollar and the business will have to pay more USD to secure the same amount of EUR it traded originally.

Instead the company could agree to enter into an FX swap contract (option 1 in our diagram below). The EUR USD swap still allows the company to fund itself in USD for the short term and then receive funds back to EUR in two weeks time without any exchange rate fluctuations. 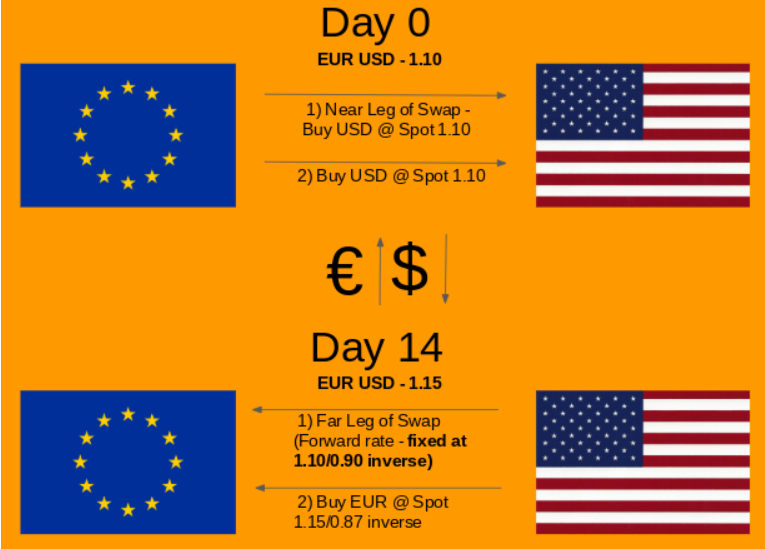 In this example had the company traded €100,00 EUR @ spot on Day 0 they would have received $110,000 in both scenarios. However, on day 14, the company would have only received the same amount of €100,00 EUR in return had they agreed to enter into a swap. Had they waited two weeks to convert USD to EUR at spot, then in the example above, $110,000 would have achieved $95,700 EUR. (Note for simplicity this example does not take into account the spread your provider would charge or a slight difference in the forward rate due to interest rate differentials).

In virtually all cases an FX swap involves a foreign exchange spot transaction, often referred to as the near leg, and a forward contract going in the opposite direction, often referred to as the far leg. Both trades are executed simultaneously and for identical values. So it’s not so much an FX swap vs FX forward question as a swap will encompass a forward contract.

Just a quick note on FX swap rates – the only difference in an FX swap will be in the rate for the forward contract as forward rates will differ slightly to spot rates in order to account for the interest rate differential between the two currencies. This is explained in our full guide to forward pricing here (including a Forward Rate calculator).

If you are wondering about the difference between an FX forward vs FX swap then it’s simply a case that the FX swap involves making two simultaneous agreements at the same time. If, for example, a company made a spot transaction to purchase AUD with GBP and then booked a separate forward contract after that trade was made to buy GBP again with AUD, they would still be opening themselves to exchange rate risk during the time it takes them to book two separate trades.

In summary, we hope to have cleared up the relationship between an FX swap vs FX Forward and highlighted when an FX swap would be a useful tool. As with all FX products there is a time and place where FX swaps will be the most relevant solution and are best suited as part of a wider hedging strategy. But just like with an FX forward contract, you can completely hedge your position in the market with an FX swap too. Readers interested in a greater variety of hedging tools should also refer to our guide on FX options.

Thinking of using other transaction types? View our hedging guide:

View a List of FCA-Approved Money Transfer Companies in UK

Today's Foreign Exchange Rates and What do they Mean?

Read Our Magazine
New to moneytransfercomparison.com?

Are you working for a money transfer company and wish to be reviewed on Money Transfer Comparison?
Here is how to apply
You can apply through our contact form. Upon contacting us please provide full disclosure on the company you are representing i.e. be transparent and provide real data that we can look at to decide whether the company is worth covering and reviewing.Do not attempt to grab our attention by offering commercial partnership deals right off the bat. We only partner up with proven companies after reviewing them.
This website uses cookies to improve your experience. We'll assume you're ok with this, but you can opt-out if you wish. Accept Read More
Privacy & Cookies Policy
Necessary Always Enabled