Skip to content
This is a non-standard review, because CityAM Money Transfer doesn’t actually offer international money transfer services but it is in fact a white label for Moneycorp.

CityAM is a free newspaper that is distributed around London. It’s daily distribution figures are at almost 86,000. The newspaper is on the topic of business and was founded in 2005. Whilst it has declining numbers, the newspaper is still fairly established in London, most likely because it’s free and the editor upon launching used to work for the Sunday Times.

The libertarian free paper also launched a website in their 2014 digital expansion. By the end of 2014, their website traffic had grown by a factor of three. By the end of 2014, they had released their CityAM Money Transfer service, and with them being the first online news site to block AdBlock, their eye for digital monetisation was fierce. 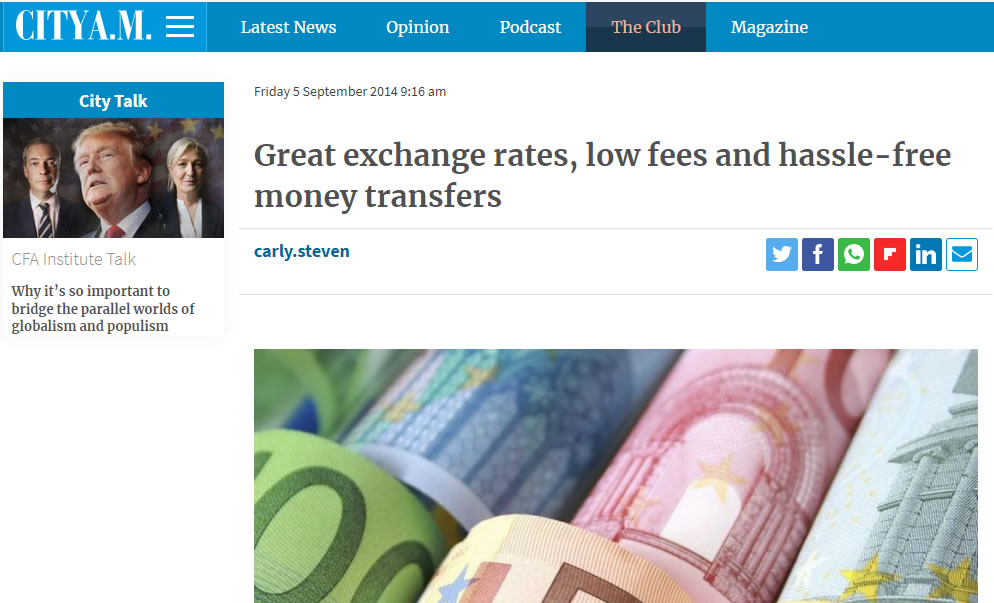 A CityAM Money Transfer review is really just a review of Moneycorp, and here’s why: CityAM describe their service as if it is their own, but really it’s a white-label service. Instead of conducting transfers and exchanges themselves, they hand you over to Moneycorp. Most of us are sceptical of such a pass-over to a third party, but in this instance, it might just be for the best. Moneycorpa ton of experience, whereas CityAM is merely a publisher. Therefore, they’re simply trying to make some affiliate money by getting customers to sign up to Moneycorp– but this doesn’t mean you should avoid at all costs.

About the Service Provider – MoneyCorp

MoneyCorp was founded in 1962. Clearly, Moneycorpis extremely experienced, and it shows in their service. They have a 4.3 rating out of 5 on Trustpilot, from a total of 3,457 reviews. Given City AM libertarian, free-market agenda, it comes as no surprise that they are willing to partner with a highly efficient remittance company – which better interconnects economies around the globe.

When dealing with Moneycorp, you’re sure to experience a highly professional service that is reliable. Fees are kept to a minimum, and whilst exchange rates are not explicitly denoted, they are described to be up to 4% better than the bank’s service.

Should I use the CityAM Money Transfer?

In our opinion, there’s not much wrong with CityAM Money Transfer. If you like the outlet, then this is a good place to start. They’re not overly established, and certainly not as famous as Moneycorpthemselves. Thus, why go through CityAM to use Moneycorp, when you could use Moneycorpdirectly?