Skip to content
This is a non-standard review, because The Guardian International Money Transfer doesn’t actually offer international money transfer services but it is in fact a white label for Moneycorp.

In Britain, the Guardian is known as one of the very few newspapers that do not exercise right-wing bias. Whether or not it demonstrates left-wing bias though doesn’t interfere much with its hugely impressive reputation as being an informative newspaper (it is deemed the most trustworthy newspaper in the UK).

The Guardian was founded in 1821, almost 200 years ago, and was a broadsheet newspaper throughout that time up until 2005. With its profits being reinvested into journalism as opposed to dividends for shareholders, the Guardian upholds a lot of values and journalistic reputability.

The Guardian has a daily circulation of around 130,000. With print journalism declining, its website has picked up in popularity. They have been penetrating other forms of media too, such as podcasts, to further distribute content and news. 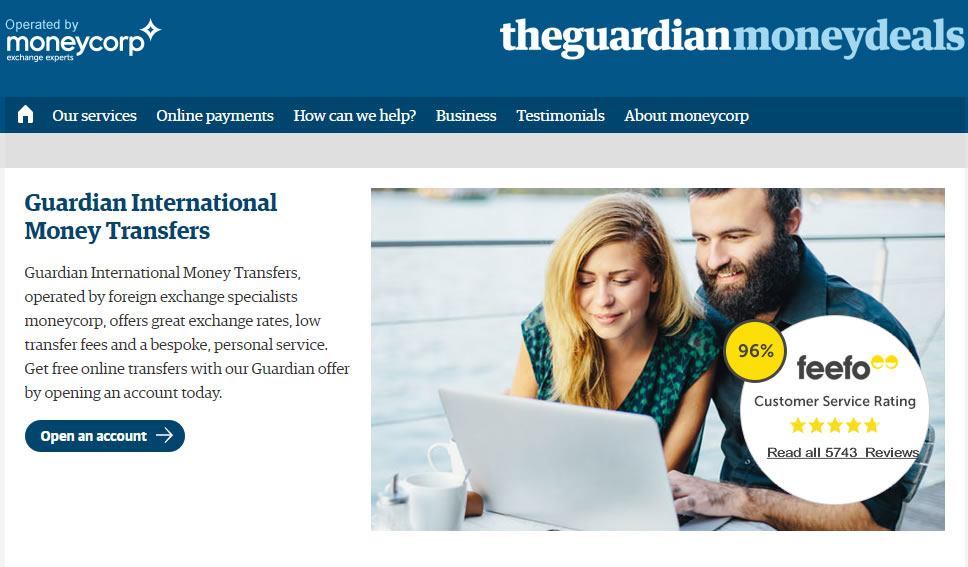 Guardian money has a similar pitch to others, like CNN Money Transfer. Guardian claims that they offer rates that are typically 3-4% better than that of a high street bank. They then go on to state that there are no fees with online transfers, compared to banks charging £20 to £40 for an overseas transfer.

It then comes as no surprise why their pitch is similar, as both are being operated by MoneyCorp. The Guardian Money Transfer is one of many white label remittance services that MoneyCorp is orchestrating.

As the Guardian Money Transfer review on the site states, MoneyCorps has a 96% satisfactory rating on Feefo, and they are wholly responsible for this service. In fact, when signing up on the Guardian’s website, you will simply be redirected to MoneyCorp instead.

About the Service Provider – MoneyCorp

So, the real review starts here. The Guardian is a great company, but really they have nothing to do with this service. The good news is that the customer is in a very safe pair of hands. Moneycorp is an industry veteran and one of our favourite foreign exchange service providers in the world. On the other hand, why not just sign up directly with Moneycorp?