This review of Commonwealth Bank International International Money Transfer will explain the pros and cons of using one of Australia’s largest banks specifically for sending money abroad. As always, we’ll focus on the important aspects of Commonwealth Bank’s international payment service like payment fees, exchange rates, and the quality of the service provided. To view specialist money transfer firms in Australia, as well as other banks offering international wires, see our top money transfer companies in Australia list.

It’s always worth comparing banks like Commonwealth with competitors who specialise in the provision of international payments only. In particular, be sure to compare the currency rate on offer. Take a look at these alternative providers available in Australia and a number of destinations around the world:

Headquartered in Sydney, the Commonwealth Bank of Australia, also known as CommBank, is the second largest multinational to be listed on the Australian Securities Exchange, with an estimated market capitalisation of $160bn AUD (Feb 2022). It is the largest bank in Australia, bigger in size than Macquarie, NAB and ANZ.

The bank has been at the centre of a number of controversies throughout its time in operation. Most recently, a Royal Commission report into the Misconduct in the Banking Industry uncovered a negative culture within the Bank, resulting from allegations of fraud, deception, and money laundering. In 2018 Commonwealth Bank settled an interest rate rigging case brought by the ASIC for $25 million. In the settlement, the bank admitted it engaged in “unconscionable conduct” and manipulated the bank bill swap rate on five occasions between February and June 2012.

Commonwealth Bank is certainly “safe” in the old-fashioned sense of the word. It has a huge market cap of $160 billion and in 2021, their net profit after tax was approximately $8.8 billion AUD. Deposits are covered under the Financial Claims Scheme up to $250,000 and, given the multifaceted nature of its services, the bank is required to adhere to more regulatory obligations than any other Australian financial services provider. It’s certainly well-known and operates over 1,100 branches across Australia (specialist FX companies in Australia usually operate with one sole office and no branches).

On the flip side, despite its size and recognised brand, the firm has had civil proceedings launched against it by ASIC for rigging interest rates and by AUSTRAC for breaching money laundering terrorism financing laws. You can look at this in two different ways – these are very severe allegations levied against the bank but given the culture which is unfortunately all too common in banking, this type of poor publicity is certainly not limited to Commonwealth Bank. In fact, it’s highly similar in nature to the poor reputation of multinational banks in Australia, UK, Europe and USA.

Please note, the Commonwealth Bank client reviews discussed here relate to a wide variety of services offered by the bank and are not specific to Commonwealth Bank international transfers. They provide an indication into the culture, customer satisfaction and overall level of service at CommBank.

*/ This is just a sample. Too many complaints to list here.

There is significant discontent with the service offered by CommBank. The overriding issue for the majority of users is the incredibly long wait times when contacting the bank by telephone. Many are leaving their 1* reviews whilst still being on hold 2 hours after calling the bank. Some users were more understanding and believed long wait times were simply par for the course when working with one of the big four banks in Australia. What we can say is that users wishing to speak to somebody over the phone with regards to international payments can easily access their dealer by phone when working with the likes of TorFX or OFX. OFX also leverages its global offices to offer 24/7 customer support – if clients call out of hours in Australia they can still speak to a member of the OFX team from the UK or US. With any top rated currency broker, there will almost always be no wait times, no automated robots to speak to and if clients are put on hold it will be for no more than a couple of minutes.

In all fairness – our global research has show that bank CONSTANTLY rank poorly in customer review websites, and hence it’s difficult to judge Commonwealth Bank of Australia against a small brokerage in Australia, but that is no excuse why customers would be THIS discontent with the service they are receiving.

Payment fees depend on how you are planning on making the international payment with Commonwealth Bank. A full breakdown of all associated fees related to CommBank international transfers can be found here: 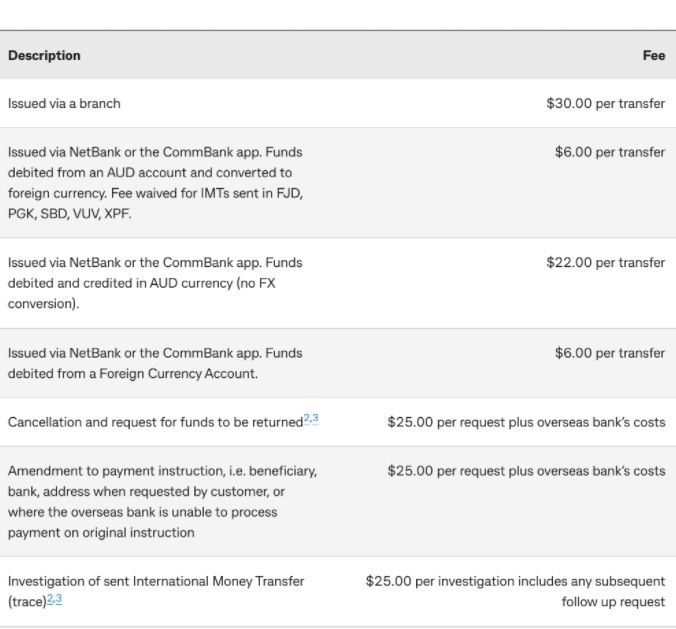 A $30 payment fee is quite excessive for arranging a payment in a branch, though this is the norm for banks – they always charge more for this functionality. The other fee to look out for is $22 when transferring money from Commonwealth Bank abroad in AUD and there is no FX conversion taking place (i.e. the recipient is set to receive money into an AUD account abroad).

A $6 international payment fee with CommBank when initiating a transfer online or over the app is quite reasonable though this is still beaten by dedicated FX firms. In comparison, commercial FX companies like TorFX charge $0 per transfer from Australia on any amount. And whilst they don’t have branches like CommBank, they also charge $0 for customers who prefer to arrange payment over the telephone.

An analysis on these rates suggests an estimated 4.3% exchange rate markup on Commonwealth Bank international wires from AUD to GBP. It’s worth pointing out the six minute differential in the data (due to the data points accessible online) but the ten-minute intervals that were available indicated a pretty constant AUDGBP rate between 20:00 and 20:10 so this should be seen as a reasonable estimate. It’s certainly not an uncommon markup when converting currency through a bank either. A standard private or small business customer can expect to pay around 4% with most major banks around the world.  The currency converter also suggests no improvement in the exchange rate markup when sending larger amounts, though we think this probably a limitation to the online calculator as 4.3% would be ridiculously excessive on large international transfers with Commonwealth Bank.

A 4.3% markup is certainly higher than the likes of TorFX or OFX. These firms provide a better rate the larger the amount that is sent but should never be as high as the estimated markup applied by CommBank, even for low-value transfers. Wise (formerly TransferWise) charges a fixed margin of 0.45% on these two currency pairings, which is around 9 times cheaper. OFX and TorFX could be even cheaper than this on large transfers.

Limits: Not stated but we can assume with confidence there would be no minimum or maximum value when you transfer money from Commonwealth Bank abroad.

Commonwealth Bank international payment fees and exchange rates are much higher than with any commercial fx provider.

By and large, CommBank international transfers are available to Australian residents only. In comparison, the Sydney-headquartered but truly global FX company OFX is available in Australia, New Zealand, Canada, USA, UK & Europe. And whilst CommBank is likely to offer virtually every currency on the planet to its large corporate customers, only 36 are made available to individuals and SMEs. With all of the major routes covered, this shouldn’t be an issue for most people sending an international transfer with Commonwealth Bank but those with more niche requirements are likely to have better luck with a dedicated FX company.

The customer service for Commonwealth Bank international transfers and Commonwealth Bank as a whole is generally regarded as awful. The best money transfer companies offer a dedicated FX dealer that provides individual guidance to clients on the currency markets and the hedging tools that are best suited to meeting their objectives

Needless to say there are a huge array of different financial services available through a multinational bank like Commonwealth that go far above just the ability to transfer money from Commonwealth Bank abroad. It is difficult to apply the same criteria used for commercial foreign exchange companies and a bank like this. Other services such as private loans, corporate loans, mortgages, credit cards, current accounts, saving accounts and investing are all available.

Interestingly, however, individuals and SMEs are able to access a greater variety of FX hedging tools with a dedicated FX company. Large corporates and financial institutions can enjoy access to any number of FX contracts and derivatives with CommBank but SMEs and individuals looking to transfer money from Commonwealth Bank abroad simply can’t access these.

Even the most vanilla of hedging tools like a forward contract, which allow users to agree today’s exchange rate for a point in the future, can be difficult for individuals to access with a big bank like Commonwealth.

CommBank has, as expected, an app for both iPhone and Android.  Amongst a number of banking activities, clients can use these apps to send CommBank international payments from their mobile devices effortlessly.

The app is generally appreciated by clients and considered a much better experience than dealing with CommBank over the phone. The functionality is similar to the apps featured in our  best money transfer apps page (though being non-FX oriented it lacks functions like being able to place a limit order on FX or receive rate alerts.)

CommBank has a whole array of financial services available to its customers. However, when it comes to FX, its hedging tools are reserved for large corporate and institutional clients only.  Given the sheer volume these clients trade, individuals and SMEs trade just a tiny volume compared to this, hence the bank doesn’t make them a priority (even large corporate FX volumes appear small compared to financial institution clients like pension funds). Still, outside of banking spheres, it’s by no means a small volume that individuals and SMEs trade overseas and a number of specialist FX companies recognise the value in providing these services for these clients too. It’s only fair they should be able to access the same kind of hedging instruments, which allow for better management of their currency exposure.

CommBank is the largest universal bank in Australia. It’s been operating for over 100 years, is heavily regulated and has a huge amount of assets under management. It hasn’t however been without its fair share of bad press and has made some astronomical out of court settlements with Australian regulators, including a $700m settlement with AUSTRAC for malpractice around anti-money laundering and counter-terrorism.