This Tik FX review will cover TikFX’s company history, structure, services and client reviews. By the end of the review, you should gain an understanding as to whether TikFX suits your needs for FX services.

📝 TikFX isn’t of the best 10 rated fx firms on Money Transfer Comparison January 2021 list, based on its editorial ranking. Want to find other options? take a look at TikFX recommended alternatives here.

Tik FX operates only in Singapore and Malaysia, sending money outwards to 14 Asian countries. Either bank-to-bank, to over 400 mobile wallets, or to over 130,000 cash pick-up points.

From the beginning, Tik FX has sought to lower operating costs, widen its geographic coverage and generate value at a technological level. Its ultimate goal is to become a professionally structured “Fast Transfer” proposition in both the regional and international market – and it seems to be achieving this by delivering 95% of payments to India and Europe by the next working day.

Tik FX were reported to be expanding their services to Hong Kong, UAE, Kuwait, Jordan and even the UK. However, we have not noticed any developments in the company’s global footprint over the last couple of years.

In 2020, Tik FX launched an integration with the Myinfo initiative launched by the Singapore Government. As a secure personal data platform, it makes registering for financial services in Singapore faster and easier. This can be particularly helpful, knowing that onboarding requirements can be significantly tougher in Singapore than other countries.

The firm is quite active on social media, posting daily updates on FX rates and notifying customers of any developments to its services. Its head offices are located in Bangar South, Kuala Lumpur.

Tik FX is part of theTranglo Group of Companies. Tranglo is an extremely well-established global remittance company. Founded in 2008, Tranglo has grown its presence considerably in Asia. They have been pioneers in the technology that makes cross-border transactions cheap, fast and secure. This is perhaps the biggest cause of Tik FX’s success.

Tranglo has 1,300 payout partners in 128 countries and has performed over 20 million transactions to the total value of $6.9 billion. Over the last two years, Tranglo has processed $2.9 billion — so growth has been exponential.

There are no awards specifically relating to Tik FX. Tranglo actually sponsored and awarded the RemTECH Awards in 2018, highlighting their authority within the Asian remittance industry.

Tik FX doesn’t have many reviews as a remittance company. There are however some reviews on Google Play Store concerning their services through the app alone.

The rating on Google Play is 4.4/5, which is generally considered as good. However, this does not in itself mean that Tik FX is a trustworthy company, as 188 reviews is not enough to make a decision and Google Play is not an ideal platform for review analysis.

Tik FX doesn’t have many reviews as a remittance company. There are however some reviews on Google Play Store concerning their services through the app alone.

The rating on Google Play is 4.5, which is considerably good. However, this does not mean that Tik FX is a trustworthy company, as 179 reviews is not enough to make a decision and Google Play is not an ideal platform for review analysis.

As Tik FX utilises the same payment networks as Tranglo, it seems that the payments which are successfully made through the Tik FX app are delivered fast and reliably. The major issues seem to be on the front-end of the Tik FX app where some users are unable to set-up payments or use the app at all. Some users report expensive payment fees too.

It should be noted, with Google Play being the only source of customer reviews for Tik FX, it is difficult to judge how good the FX service is Although the existing reviews seem to be overall positive, saying that the service is easy and fast, it is important to keep in mind that the amount of reviews is not significant enough to know that they have not been faked and the service is truly reliable.

The exchange rates have varied margins, so you will need to pay attention to each quote you’re given (it doesn’t say the mid-market rate next to it either).

A current example from the website quotes 1 MYR to buy BDT 19.2433. Currently, the mid-market rate is 1 MYR to BDT 19.5145. As we can see, this margin isn’t too bad. It may not be the best rate on the market currently, but these are relatively exotic currencies to be trading with a margin under 2%.

Exchange rates are seemingly competitive, though they’re not transparent in the sense that you’re forced to calculate the margin yourself. There are fees for bank deposits and cash pickups, which is a somewhat outdated model in this industry.

There are roughly 1,300 banks/wallets worldwide which are compatible with Tik FX, along with 130,000 cash pick-up points. Whilst there’s no bespoke service and the firm handles just 14 currencies, the global reach is generally satisfactory for the destinations that Malaysia/Singapore residents are sending money. Notably, payments are possible to both India and China are possible. i

The Tik FX app is somewhat impressive, despite its apparent frequent updates. Registration is completely automated, where you simply scan your ID into the app and take a selfie video. The app provides a clear image of what rates you have access to and it’s easy to execute transactions. 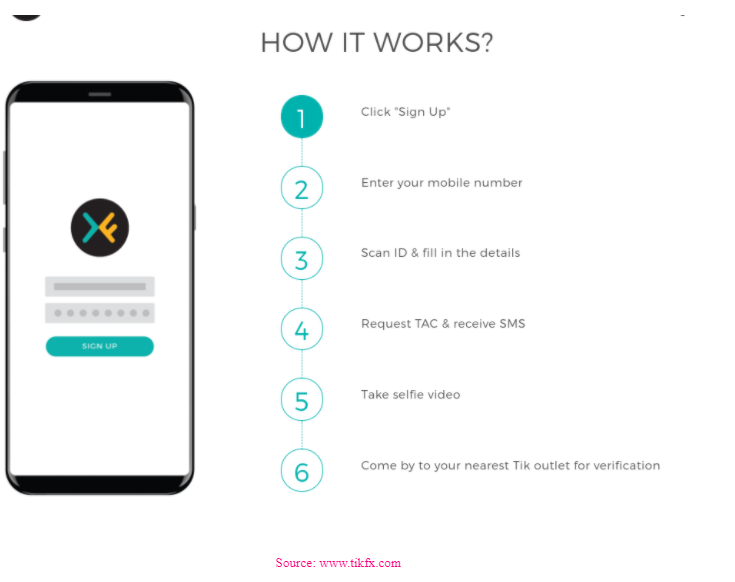 Tik FX is more than just a virtual wallet, too. Customers can pick up their currencies at cash pick up points, of which there are over a hundred thousand around the world.

There’s very little other functionality that Tik FX offers to customers other than its reasonably effective app. Of course, cash pick ups are useful and relatively novel for startups in this industry, but there’s no chance of hedging or business solutions with Tik FX.

Tik FX offers reasonable exchange rates for currencies (predominantly Asian) that aren’t always available at FX specialists. With a slick app and fast sign up process, you can easily transfer funds and even pick up the cash. Tik FX is somewhat reputable, though it lacks customer reviews and online presence. Overall, it’s a simple, limited service but is powered by a large remittance company in Trianglo and is a very valid option for Asian currency transfers for Malaysia & Singapore residents.

Our highest priority is the safety and security of your funds.

All the companies recommended on this website are authorised as Payment Institutions or Electronic Money Institution by at least one prominent regulator.

Since these major shocks, FX market volatility had been dwindling. That was until COVID-19 wreaked havoc for economies and financial markets around the world, where due to these unimaginable and unforeseen circumstances, we’ve already started to see a much more volatile 2020 vs 2019.

Today's Foreign Exchange Rates and What do they Mean?

Are you working for a money transfer company and wish to be reviewed on Money Transfer Comparison?
Here is how to apply
You can apply through our contact form. Upon contacting us please provide full disclosure on the company you are representing i.e. be transparent and provide real data that we can look at to decide whether the company is worth covering and reviewing. Do not attempt to grab our attention by offering commercial partnership deals right off the bat. We only partner up with proven companies after reviewing them.
This website uses cookies to improve your experience. We'll assume you're ok with this, but you can opt-out if you wish. Accept Read More
Privacy & Cookies Policy

Any cookies that may not be particularly necessary for the website to function and is used specifically to collect user personal data via analytics, ads, other embedded contents are termed as non-necessary cookies. It is mandatory to procure user consent prior to running these cookies on your website.