Cryptocurrencies, if have haven’t heard of them before are a form a digital currencies that were first developed back in 2008 and have gained much traction for international funds transfers. The first cryptocurrency was Bitcoin; it still currently has a majority of the market. Bitcoin, Ethereum, Bitcoin Cash, Cardano, and Ripple make up the current top 5 digital currencies by market share. Ripple recently took second in market share from Ethereum in the beginning of 2018, and has struck the imagination of many. Will Ripple be the answer to effective money transfers across borders?

What is Ripple? A simple infographic. 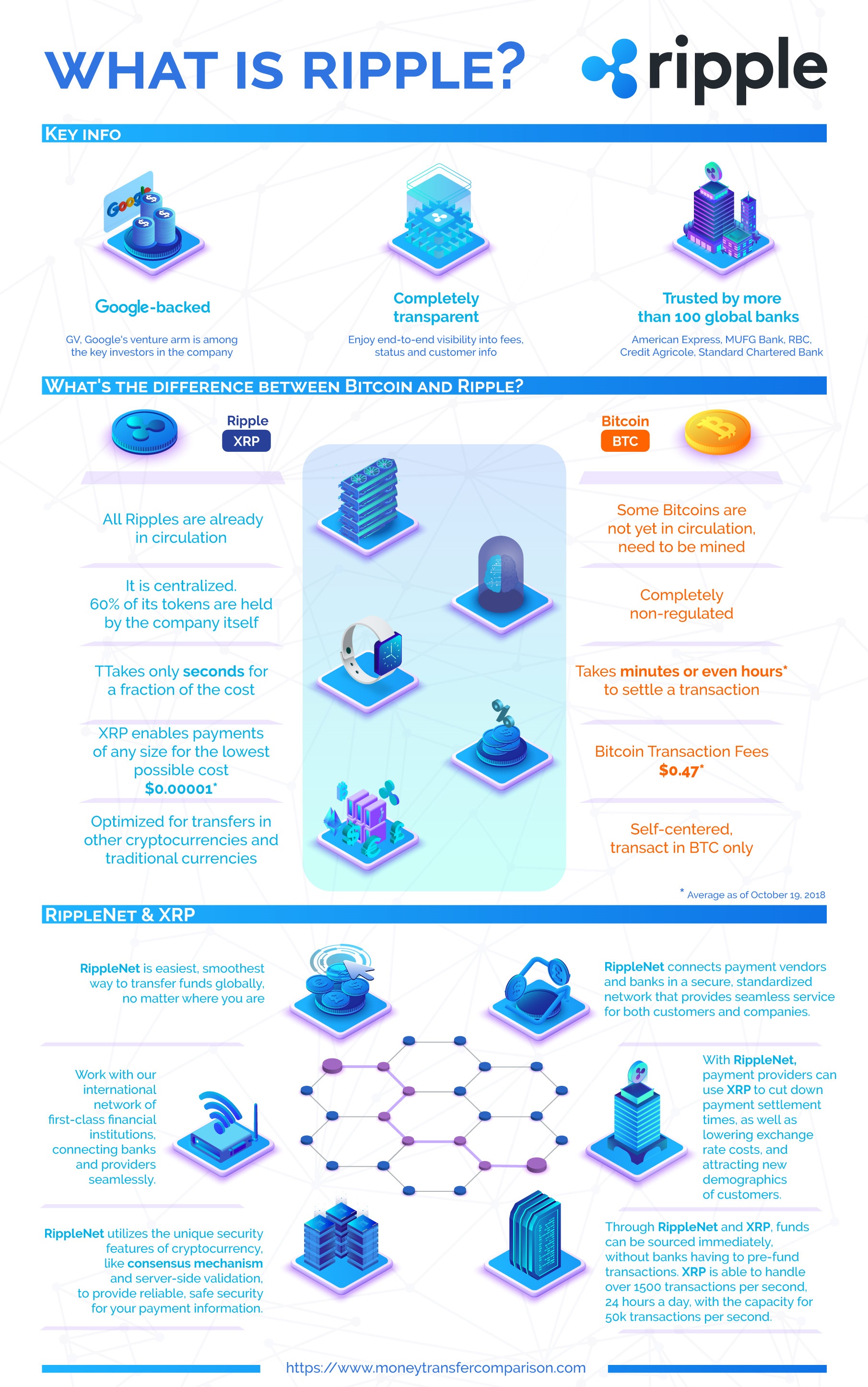 Ripple, symbol XRP, is an up-and-coming cryptocurrency with a unique touch – it has been designed for a certain purpose. It is meant to simplify the process and process associated fees with the transfer of funds between banks.

It has been receiving a lot of headlines yesterday due to several factors that include Google’s early investment in the Ripple company, the drastic increase in price over 2017, and the fact it is one of few Cryptocurrency startups which are completely transparent about the way they operate and what they desire to achieve. The Ripple protocol is already trusted by more than 75 banks across the globe who chose to experiment with its payment network, and most recently American Express announced a collaboration.

How does Ripple work?

The Ripple idea goes back as far as 2004 when Ryan Fugger first came up with the idea of a digital coin. Unlike most other digital coins (later to be known as Cryptocurrencies) it was built to serve a certain purpose in the banking system. The XRP has a built in system named the “Ripple consensus” which approves transactions quicker and more effectively, making it apt for specific type of transactions: bank to bank transfers, currency exchange and remittances. Some industry experts have suggested it may replace current protocols like SWIFT and IBAN through a standardized protocol that can be used globally.

What is the difference between Bitcoin and Ripple?

Both Bitcoin and Ripple are cryptocurrencies, but they differ from each other in a various ways. For starters, Bitcoin needs to be mined by miners who are rewarded with bitcoin, while XRP does not need mining. There is a finite amount of Ripples in the world, and no new ones will be mined.

Another big difference between them is the designation. The idea behind bitcoin is in many ways more noble – a single anonymous coin which not owned by any government or central body. Completely non-regulated. While Ripple is a coin designed specifically for bank transactions – it is centralized, and 60% of its tokens are held by the company itself.

Software Engineer David Luwaga Seruyange, who specializes in bitcoin, says that the transfer costs are still a bit of an issue for Bitcoin, but Ripple has nailed it. Ripple has taken the digital currency concept and improved the platform to offer a better funds transfer experience than its competitor, Bitcoin. Bitcoin takes hours to settle a transaction, while Ripple takes seconds for a fraction of the cost.

What is the Ripple consensus process work?

In layman’s terms, the XRP is built in a manner that will enable multiple checks of each transaction made on it while using minimal resources. In other words, what Ripple creators wished to achieve is 0% error rate, minimal latency in transactions and minimum fees.

If we delve a bit diver into the mechanism we can discover that the system works in an iterative way. A transaction is checked by a certain amount of nodes in the network and when it reaches a 50% certainty it is pushed over to other node to recheck it, and so forth, until the approval rating is sufficient.

Unless you a developer with a very particular expertise in this field, it would be difficult to get an all-around understanding of the inner mechanism. This cryptocurrency has been developed for 13 years – there is a lot of depth to it.

Will Ripple change the future of money transfers?

Making future predictions on cryptocurrencies is a foolish act. It may take over the world by a storm or disappear to ashes at the same speed it has risen to the top. If cryptocurrency would take off – then it is reasonable to believe Ripple will have a significant role in such future.

Ripple is the only protocol which has been relatively adopted by banks and credit companies. It is designed to replace an aged protocol that has obvious faults in it. Solving a problem like remittances fees can change the world. New: we added a review for FlashFX the only company to boast using the ripple for money transfers.

Should I be using XRP to do my international money transfers?

Recommending XRP at these current times is problematic due to large price swings (like Bitcoin!). It’s true that most of these swings are positive, and that its value has grown x5 in the past 6 months, but it can still lose 10-20 per cent at any given day. So perhaps it would be wise to use XRP or even hold it, if it’s money you feel free to risk.

Another situation where you would like to use XRP is in areas where it’s difficult to transfer you money abroad.

If your aim is to transfer money from point A to point B from two western countries with modern banks and availability for money transfer services, we would recommend them over XRP for now.

How to buy XRP

It’s not as easy as we would like it to be. The best way we found is sites like Coinbase, buy bitcoin and then exchange it to Ripple. The XRP to BTC exchange costs are very marginal and the transaction would still be very cheap (the cost of buying bitcoin on Coinbase is around 1.5% for U.S citizens, and the actual transaction is something like 0.001% of the value).

This type of volatility comes with digital currencies still being in their infancy. The volatility shows itself this last week when Coinbase denies adding Ripple to its services. The denial from Coinbase was followed by a 20% drop in Ripple’s value.

As digital currency becomes more widely accepted it will solidify itself as a real competitor for the monetary world. As long as you can’t walk into Starbucks and use your Ripple or Bitcoin to buy a venti Caramel Macchiato, their value will be limited, but if they pass all the regulation hurdles, then their value will become less of a speculation and more of a real denomination based on purchase power.

Moneygram has just announced to launch a Beta for Ripple transfers. Huge news for the firm and for Moneygram!

Ripple has announced a new feature and an upcoming launch of a full-suite product, resulting in a relative increase in prices.


This article is a part of MoneyTransferComparison’s Magazine (Cryptocurrency):