Should I use Payoneer?

Is Payoneer Safe to Use?

Where is Payoneer Available?

Payoneer provides a very diverse solution for freelancers, online sellers, and businesses who want to send and receive money from abroad (or hold it in foreign currency). The online system is comprehensive and diverse, and there is a constant flow of new features. For international SMEs, Payoneer might be the best solution for B2C international payments. On the flipside, the currency exchange rates are sub-optimal and there are many Payoneer customer complaints online. If you pertain on using Payoneer as your multi-currency account whether as a freelancer or a business, we believe that there are better multi-currency accounts out there with lower fees and better client acceptance.

While Payoneer was a completely unique solution in the market for many years, others have started following its footsteps. Companies that focused on international payments for businesses and private clients have realised that they can set up virtual multi-currency accounts for their customers, and some of them offer significantly better exchange rates and service than Payoneer. View our favourite Payoneer alternatives and competitors below.

Are you eligible to use Payoneer?

✓ You are eligible!
Sign up with Payoneer within 60 seconds
× Payoneer does not support transferring money abroad by individuals.
View the best companies to send money abroad

Payoneer was founded in 2005 by Yuval Tal, who was the CEO at the time as well as the lead investor. Mr. Tal is a prominent Fintech entrepreneur, and prior to Payoneer, he founded E4X, one of the first startups in the online payments domain, which was later re-branded as  BorderFree, and was acquired for a staggering sum of USD 380m by Pitney Bowes Inc in 2015.

Since its inception, Payoneer has been receiving serious attention from leading investment firms across the globe, and raised more than USD 245m* up to date, from companies like Ping An – a leading Chinese insurer which employees 200,000 people across the globe and generates more than $60bn in revenue each year.

Using these investments, the company has grown to become a leader in cross-border payments, boasting more than 10 global offices and employing 1,100 people (many of which deal with the complex compliance / legal aspect of the business). It is moving abroad billions of dollars each year, and serving more than 5m registered clients.

2021 update – Payoneer is going on the stock market (NASDAQ) with a valuation of more than $3bn establishing itself as a payments leader.

The Payoneer Prepaid MasterCard card is issued by Choice Bank Limited, which is supervised by the main bank of Belize. It is handled by Payoneer’s partner Wire Card Solutions which is authorised by the Financial Conduction Authority (UK) as an e-money transmitter.

Considering the information provided in this section, its stringent regulation, as well as the fact that Payoneer’s board include some of the heaviest hitters in the business, like SWIFT’s former CEO, it is safe to assume that Payoneer is not only safe, sound, and secure but is in fact one of the largest payment providers in the world.

How Does Payoneer Work?

How Does Payoneer Work?

Payoneer provides innovative solutions for both private and corporate clients who need to receive payments from abroad. The way they operate is via the creation of collection accounts abroad for each client. Any payment deposited into an offshore account is translated into the local currency as defined by the Payoneer client, and then can be wired to his bank account or alternatively, be withdrawn through any ATM with the Payoneer MasterCard. 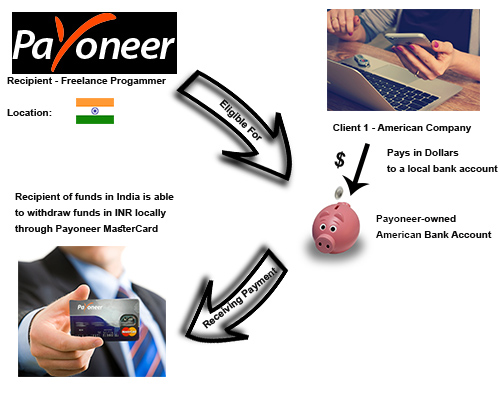 Here are the biggest advantages of using the Payoneer system:

Here are the cons of the Payoneer system:

Payoneer provides solutions which are simply unattainable by any other means. Online sellers who receive large payments from abroad have several similar alternatives, but when it comes to private clients (freelancers) none of the foreign exchange companies we have reviewed on this website offers these sort of solutions. Although this is starting to change with the Transferwise’s borderless account.

In our opinion, Payoneer provides a PERFECT solution for people who receive their salary from abroad, as well as for businesses who get paid by overseas clients.

1) Loading Fee – 1% of the money loaded into the card. This fee is waived for our readers who used our referral link.

3)Bank wire fees: None, besides recipient bank fees which are outside of Payoneer’s control.

4) Currency exchange charges: 2% above mid-market rate, lower rates for VIP clients. This fee is applicable for both card withdrawals and wire transfers.

Limits: There are no limits to receiving money with Payoneer. There are limitations for intra-platform payments which are available for VIP clients (more on that below).

Payoneer’s banking fees are not the lowest we have encountered in this industry, but it’s hard to compare them with other companies reviewed on our website because the nature of their service is so unique. VIP clients, though, can get great rates if their volumes justify it.

Since the service is mostly geared to freelancers in developing countries, we can compare them neck to neck with Paypal, which is probably the most popular payment method in this sector:

For businesses/eSellers, Payoneer can be a great solution if you are eligible for the VIP program (annual trading volume of 100,000). You can view more online seller banking solutions here.

Payoneer has one of the most complete global payment solutions we’ve seen up to date. A very strong compliance and risk departments allow them to accept clients on a truly global basis, and even provide solutions to the “unbanked” (adults who do not possess a bank account or, alas, reside in countries where the banking system is unreliable).

Nothing can be simpler than accepting payments directly into a Payoneer account and using a dedicated debit card to withdraw it through the ATM, especially for people who reside in countries like Russia, the Ukraine, India, or any other developing/high-risk countries.

In addition to the fact they accept clients on a global scale and offer them superb solutions, they have local bank accounts in many countries. Thus, the recipient of funds through a wire transfer can enjoy a domestic transfer of funds in local currency when he withdraws funds from the account, and skip the exorbitant fees applied by banks on receiving international wire transfers.

The only real vice is the slowness of service. It takes 5 days to get a response from support after signing up and it can take a whole month or more to receive your Mastercard debit card.

They have horrible Customer support. it takes them 5 business days sometimes to get back to the customer. Chat is not helpful and makes you wait for the email for an unknown period of time.

International call line does not work and it seems they are not planning to do anything about it. people complain and they either don’t respond, or respond and tell them to wait. It’s not clear how to withdraw funds from your payoneer account. you need to wait months (sometimes 8 months) to receive payoneer card. There are a lot of issues with bank transfers. Tania, A Client Who Left Her Comment Below

– Mass payout: Businesses can pay multiple recipients instantaneously, while private clients can request to be paid by Payoneer automatically in many of the world’s most popular platforms (like Freelancer.com, upwork.com, clickbank, Amazon, Google, Getty Images, Lazda, Linion, etc).

– Billing Service: Request payment from a company by sending them a bill generated via the Payoneer system. Receive payments via credit card, eCheck or direct wire transfer.

– Tax form automation: The system auto-generates W-8 forms for all payments generated through it.

– Pay other suppliers on Payoneer: Businesses with VIP status can pay their suppliers directly through the Payoneer system with no extra charges. For them, Payoneer becomes a multi-currency virtual eWallet and can conduct business without ever involving their bank beside withdrawing the funds at the end of the month.

Payoneer has a fully functional mobile application for Android and iOS which is one of the most popular money transfer apps in the world. There are 100,000,000 downloads on Android’s Google Play alone.

The international money transfer app allows Payoneer clients to check their balance at any time and perform necessary actions (like requesting a withdrawal) and is ranked 4.1 / 5 by more than 11,000 users, attesting for its usefulness.

Payoneer has a high variation of solutions embedded into its platform. Businesses can pay thousands of recipients in one click in more than 150 currencies, and automatically get the necessary invoicing and tax forms which is a huge advantage.

Clients can get automatically paid into their Payoneer account with ease in almost every ecommerce or freelancer market in the world, and withdraw the funds in cash using their Payoneer Mastercard.

The only real disadvantage Payoneer has is outbound payments which are limited to VIP business clients, and these payments can only be made to other Payoneer customers.

Payoneer offers a unique one of a kind solution for small businesses and freelancers who require an easy, low-fee, method of being paid from abroad. You can get paid through their system to your virtual bank account (also known as a multi-currency account), or even withdraw it in cash through Payoneer’s issued MasterCard. The system is smooth and easy to understand and you do not need to be a banking expert to receive the funds and withdraw them with average fees of 1% in exchange rate fees for VIP customers. You can sign up with Payoneer from anywhere in the world as the company is regulated in many different regions, and hence Payoneer boasts an impressive customer base of 5,000,000 users, more than any competitor.

On the flip side, there are hundreds of customer complaints in our comment section and other Payoneer review pages across the web detailing a very slow verification process that very often results in Payoneer withholding payments for months before clients are able to withdraw them, and also that Payoneer’s customer service is non-existent being extremely slow and unhelpful.