Should I use Pangea for money transfers?

Pangea uses a peer-to-peer network to facilitate the transactions, which means that users are able to send and receive money without the need for a third party. The service is available to anyone with a bank account and an internet connection and allows customers to send money to over 50 countries using their mobile phones. The service is available in English and Spanish as it is only focused on US customers and sending money from the US to other parts like Asia and South America. Certain destinations have low fees but for other can become quite expensive with a maximum transfer amount of $2,999 and a monthly limit of $6,000 using a debit card.
Overall ratingN/A
Updated on Nov 10, 2022
Aggregated User Votes

Where is Pangea Available?

On Money Transfer Comparison, we have reviewed 80+ money transfer services, 40+ of which could be considered direct Pangea competitors. View our best rated Pangea money transfer alternatives which have received higher ratings below:

OFX: Best for Transfers to Canada, Asia and Australia

Remitly: Best for transfers to Mexico

WorldRemit: Best for transfers to Africa and India

This Pangea review will cover Pangea’s company history, structure, services and client reviews. By the end of the review, you should gain an understanding to whether Pangea suits your international money transfer needs or not.

Co-Founded in 2012 by Rahier Rahman and Kyle Stoner, Pangea Money Transfer started with the mission of giving everyone the power to move money effortlessly, focusing on those who need it the most – migrants working abroad remitting money home from overseas. That meant providing a service which is simple, fair and secure.

To launch, the firm received venture capital funding from 12 investors to the tune of $32.7 million.

From its very early days, Pangea Money Transfer has been striving to enhance the security and reduce the cost and pain points of money transfers to outside the US. Receivers in Pangea’s 15 active countries across Asia and Latin America can collect the money at available cash pickup locations or directly into any bank account in minutes.

The company has grown into a 50 employee business, operating from a single office in Chicago. The staff is the bedrock of the business and they share a passion for providing a service that can be such an integral part of their customers’ lives.

In 2019, as part of its ongoing efforts to empower customers, Pangea Money Transfer introduced International Bill Pay. A unique feature allowing users to pay a variety of bills abroad — their own, or their loved ones’ — such as utilities, taxes, educational expenses, and more, directly from the Pangea app.

Pangea is a fully regulated money transfer service that’s licensed by FINCEN, and regulated on a state level in each and every of the 34 states it operates. A list of these can be found in their FAQs and below:

Pangea has a very good amount of reviews – there are 1,254 Pangea money transfer reviews on TrustPilot, 2,384 reviews on the Google Play store and 98 on the App store. Although that is not the highest compared to some competitors, it is definitely enough to make a well-informed decision.

Their rating on Trustpilot is 4.5 out of 5, which is decent but not the best. By comparison, some of their competitors have higher scores with a higher number of reviews (Currencies Direct for example is rated 4.8/5 based on over 5,000 reviews) showing that Pangea’s service does have some flaws.

Pangea has a good amount of 1,082 reviews on Trustpilot. Although that is not the highest compared to some competitors, it is definitely enough to make a well-informed decision.

Their rating on Trustpilot is 4.5 out of 5, which is decent but not the best. Many of their competitors have much higher scores with a higher number of reviews, showing that the service has some definite flaws.

The Pangea client reviews are somewhat mixed. Although the overall score – 4.5 out of 5 – is good, there seem to be some repetitive issues clients have with the service. For instance, the majority of the bad reviews were complaining about poor customer support and lack of explanations for transaction cancellation. Pangea has made the effort to respond to each negative review but the issue of transactions being cancelled without explanation just seems to keep reappearing.

On the other hand, there is a higher number of customers praising the ease, simplicity and prices of the services. This calls for a conclusion that Pangea would be a trustworthy company with some improvement in their customer services.

The fee you pay at Pangea will very much depend on where you’re sending  money to. India and the Philippines are the cheapest place to send to with debit fees starting at $3.95 per transaction. The most expensive debit fees are for payments to El Salvador and Honduras which can incur fees up to a whopping $24.95. Very expensive for money transfer firms but still cheaper than international payment fees with a US bank. The firm is completely transparent with its fees and information can be found in the Pangea FAQs: 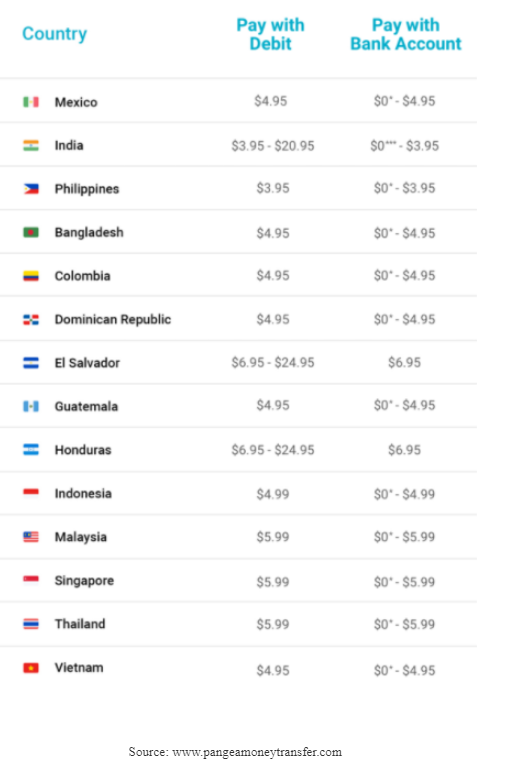 When paying with a bank account, you’re going to pay less of a fee than you would if you used a debit card. It will range from $0 to a maximum of $6.95 (Honduras) — these figures not only depend on the country you’re sending money to but also the amount.

Of course, the recipient will never incur the fee, though whatever money received will be minus any spread charged in the exchange rate.

The exchange rates at Pangea are updated live every day. They do not reflect the mid-market rate, and instead take a varied margin of 1 to 2 percent mostly.

Understanding that there are some fixed fees when sending money abroad, you would be hoping that the exchange rate would be simpler. Either the mid-market rate, or a very minor consistent margin. Instead, you’re left having to calculate the margin for each transaction yourself, and factor in the fee, to understand exactly how much you’re spending. This is both a convoluted and a relatively uncompetitive approach to FX. We can understand why a firm may need to charge more for some payment corridors and payment types as they incur more banking fees themselves but it makes it difficult for users to understand exactly what they’re going to be charged prior to initiating a transfer.

The global reach of Pangea isn’t great, but it’s useful if you’re looking to send money to Asia or some of South America from the USA. The customer service isn’t the best according to client reviews, but it’s useful having a Spanish translation on the website.

We’re surprised the firm hasn’t looked to add EUR, GBP or AUD transactions as we know a number of US citizens have requirements to make payments in these currencies but the firm continues to focus on its niche of South America and Asia. The service is completely designed for remittance based payments, hence its lower payment limits.

The service isn’t bespoke, and it’s somewhat limiting in its caps. The maximum transfer is $2,999 and there’s a monthly limit of $6,000 using a debit card.

Pangea’s app is extremely useful. It scores a 4.8 out of 5 review on Google Play, showing that it rarely suffers from bugs. It makes it very quick and easy to send money, acting as a slick dashboard for your currency dealings.

The best function of Pangea is perhaps the fact that it’s integrated with a customer’s bank account or US debit card, meaning the convenience of sticking to the same card is there but Pangea will offer a better rate if you transfer from one of your linked bank accounts.

There’s a useful blog that covers topics in FX, but it doesn’t get uploads very often. What does get updated every day is the daily exchange prices, but they do not declare the mid-market rate next to it for comparison.

Whilst there’s no business functionality, a new innovation for private clients in 2019 means you can pay international bills on behalf of yourself or other family members (electric, water, phone, cable and many more) with a fee lower than usual of $2.95. This is its own functionality, and can be very useful for migrants sending money home

The Activity Lab is the online dashboard where you can view your previous money transfers and bill payments to assess previous activity.

Pangea conveniently allows customers to fund international transfers by either paying via debit card or bank transfer. A number of the largest money transfer providers often don’t allow transfers to be funded with a bank card as the daily card limit is not enough to fund transfers. However, with the lower payment limits Pangea has, this isn’t an issue. The overall functionality at Pangea is lacking though. Whilst the app is great, it doesn’t offer much other than to send money to individuals or bills. Of course, the Activity Lab exists — almost any online-based money transfer company has one, because it makes sense to see your historical activity when using a service. There’s no hedging, no bespoke service, price alert updates — Pangea opts for a basic, linear service that seems to do the job for its target market.

Pangea is a secure, reputable company. Around since 2012, they score high in reviews because they don’t give you many problems — they’re clear on the currencies and countries they can handle and they’re fairly clear about fees, though they could be clearer on their margins. Their app is also reliable and slick.

Pangea lacks in its global footprint and functionality, but if you’re US based and looking to send money to an exotic currency such as the Dominican Republic or Honduras, then you’re going to get a decent price for it. If you’re looking to send money to more major currencies, then it would have to be coincidentally one of Pangea’s only 15 currencies, and you may get a more clear and cheaper price elsewhere.

If you’re US based and looking to send funds to Canada, Europe or Asia-Pacific then you’ll be better suited to using either OFX or Currencies Direct.