Should I use MoneyGram for money transfers?

Moneygram is a money transfer service that allows users to send and receive money worldwide. The company has been in operation since 1940, and its services are available in more than 200 countries. Moneygram offers a variety of money transfer options, including online transfers, mobile transfers, and in-person transfers. While MoneyGram is a legit house-hold name in international payments, the company has come under fire in recent years for its high fees, poor customer service, and questionable business practices in some instances.
Overall ratingN/A
Updated on Nov 09, 2022
Aggregated User Votes

Where is MoneyGram Available?

The following are online friendlier, cheaper, money transfers than MoneyGram. These MoneyGram alternatives, while we believe are better, don’t have the same capabilities when it comes to things like cash to cash transfers, dealing with very exotic currencies etc. – for corridors like transferring money to EU, these MoneyGram competitors are definitely a viable alternatives, but in some corridors, these companies won’t be available and MoneyGram or Western Union may be the only choice.

One of the Hottest Money Transfer Startups

The US-based business was founded in 1940 to deliver money orders. As its brand name expanded in the 80’s and 90’s, the problem of remittances became a real concern for the global economy, and there were very few competitors in the field (the biggest competitor that comes to mind is Western Union). Back in those pre-internet days, you had to have a local presence to handle anyone’s money, and Moneygram has managed to pull off that task successfully. Today, Moneygram has one of the most extensive global reach in the industry (together with WU), boasting 347,000 agents across the globe.

The company has suffered some downturns during its long history. The 2008 subprime crisis had hit it with a full impact crash to take its stock to oblivion, and a $100m fine for fraud a few years later didn’t help. 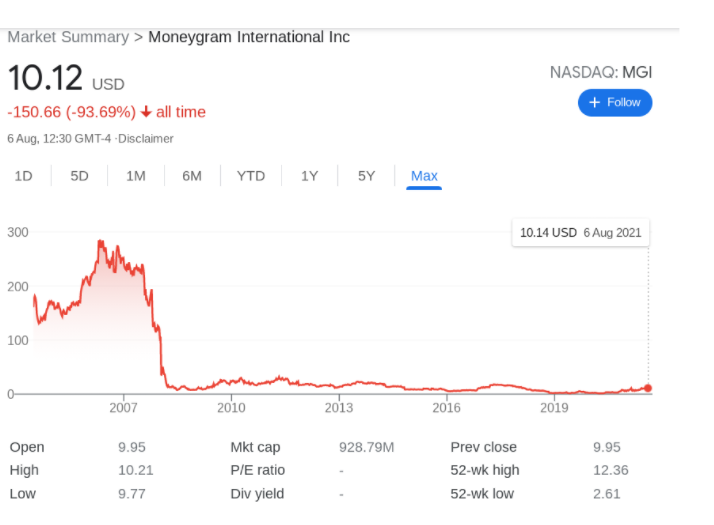 During 2017, Ant Financial  made an offer to buy Moneygram for a sum of $1.2bn. Ant Financial is a Chinese company owned by the Alibaba group (formerly named AliPay), and being that, considering the US-Chinese tensions in 2017, the deal was blocked by the U.S government. Ant Financial ended up buying indirect competitor WorldFirst.

In 2018, Moneygram announced it will be integrating Ripple into its payment system, which may be the way forward for this company. Ripple is the most payment-oriented cryptocurrency.

Almost any financial regulator across the globe, including the American SEC and the British FCA.

Moneygram is one of the biggest, strongest, and most resilient companies in the money transfer space, for good or worse. It has a fascinating history filled with glorious achievements alongside crashes and falls.

There are thousands of Moneygram reviews across the web, and there are dozens of comments left by our visitors.

We focused on the largest and most recognisable user review platforms, and discovered client reviews as follows: 41 on Consumer Affairs (who only show the most recent, this used to be in the hundreds), 3,439 on TrustPilot UK, 10,503 on TrustPilot US, 146 on Yelp.

The ratings were as follows:

In total, it’s strange to see such different experiences across three different review platforms. We can see from a notification next to the review on TrustPilot that the users who have left positive ratings have been invited by Moneygram to leave a review. So it’s possible that Moneygram has only notified loyal customers to leave a review. There’s nothing specifically wrong with that of course, these are still real customers who have had a real experience with Moneygram but it’s possible it does not incorporate the feedback of a wider sample of Moneygram users.

The vast majority of positive reviews are on TrustPilot. 80% of UK users reported a positive experience with Moneygram and 77% of US customers did.. They indicated the following positives with the company:

Based on the research we have conducted, there is a real mixed bag of reviews telling us very different things about the company. The situation is similar to Western Union, the only company which is really comparable to Moneygram but we have to say Moneygram feedback just about edges them for positive customer experiences.

Some of the angst directed at Moneygram may be unjust. Perpetrators are using Moneygram’s service for money transfer scams but there is little the company can do in that regard. Additionally, some clients may have unrealistic expectations.

Moneygram’s TrustPilot ratings have really improved over the years and it appears for many the service is working just fine, providing an efficient and reliable service. That being said, we shouldn’t look past the many negative reviews either. Even though the TrustPilot score has drastically improved, there is still a much greater proportion of complaints than providers like CurrencyFair and Wise.

We can say Moneygram shows good ethics by presenting a cost calculator on their website. It makes figuring out the exact costs easier than with other companies. It seems to be a more prominent feature with companies who have a remittance focus as the only other companies on the market showing this type of feature at the moment are Wise (Transferwise), Currencyfair, Azimo, Western Union and World Remit (from the ones we have reviewed to this point).

The team at MoneyTransferComparison.com have tested some of the most common currency exchanges with Moneygram, and also used the World Bank to compare smaller sized transfers/remittances and figured out the rates offered are sub-par. In some corridors for small transfers they are more competitive, and what we’re seeing is less than Moneygram charged a few years ago, suggesting they have became more aware of increasing competition, but they are still expensive.

If you look at the ever-popular corridor of Pound to Dollar, you could see that on August 6 where the rate was 1.3875, Moneygram’s offered rate was 1.3517, suggesting a 2.5% markup on a very popular currency and a rate that is no better than a bank. 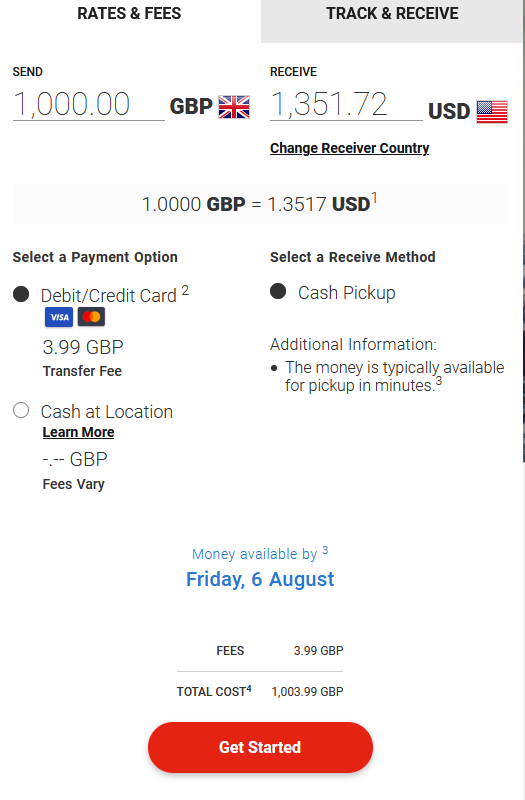 If you check for remittance countries like Romania, the World Bank claims Moneygram is as much as twice as more expensive than Wise (Transferwise) but surprisingly the cheapest way to pay both 120GBP and 300GBP to RON (August 2021 tested) was WU.com, Moneygram’s direct competitor.

Users may send up to $2,500 daily, using Moneygram’s online service. $9,999 is the limit for agent office transfers. $899 is the daily limit for Moneygram mobile app transfers.

If your aim is to save money, you should shop around and check alternatives, if they are available in your area. Moneygram has a lot more global reach than some of the relatively smaller competitors, so there might not be any cheaper alternatives; but based on the sampling we have conducted, there would be cheaper alternatives when moving money from the UK, USA, the EU, Australia and New Zealand for most destinations.

Moneygram is one of the most international companies out there. They have built a network of agents over 8 decades and have far more banking relations and understanding of the money transfer business than any of the newcomers.

The firm’s website is translated to multiple languages, and clients are accepted worldwide in the truest sense of the word, as many of their competitors claim to be global but have nowhere near this sort of reach.

As many of our readers are moving substantial amounts of money each month it should be noted that Moneygram is a remittances service. Its greatest advantages like accepting cash transfers and moving them, in cash, to locations like Africa, South Asia and Eastern Europe, are not applicable for readers who seek to move a hefty salary abroad or make a large purchase.

Moneygram has a Corporate website which enables small, medium and large businesses to conduct their foreign exchange affairs there. It is stated on the website that corporate clients can have access to spot contracts, forward contracts, limit orders and other hedging tools.

Moneygram has mobile apps for iPhone and Android devices. These applications provide all the functions of the website to mobile users. These apps are rated 4.3 / 5 on the Google store and an impressive 4.8  / 5 on the Apple Store. A really well reviewed app that has been downloaded millions of times.

Moneygram has serious advantages in the form of very wide global reach and 80 years of reputation. The website is seamless to use, the rates and fees are clear and transparent and you can transfer money by debit card, bank transfer or in cash (through a branch).

On the downside, Moneygram’s online fees are worse than competitors, with a whooping 2.5% markup on a £1,000 GBP-USD transfer, and you can send only up to $10,000 per transaction. As a whole, the company is not suitable for customers who want to larger amounts of money to popular destinations, because Moneygram’s rates are nowhere near competitive for that.