March 24, London — With the upcoming (delayed) Brexit deadline on April 12 rapidly approaching,  and uncertainty still at peak, the British people, including “Leave” voters, are beginning to second-guess their vote.

A recent survey commissioned by Money Transfer Comparison, which collected responses from over 2,500 Brits, has gained some insight as to what average citizens are expecting come Brexit time. Diplomacy and trade negotiations are important for understanding the economic future, but at the end of the day it’s the everyday people of a country that keep the economy moving. Here’s how they feel.

Even “Leave” Voters Are not Confident of Post-Brexit Economy

Of all those surveyed, one of the most interesting responses came from the “Leave” voters (those who voted in favor of Brexit) and their sentiments about the near future of the UK’s economy even if a deal is made. 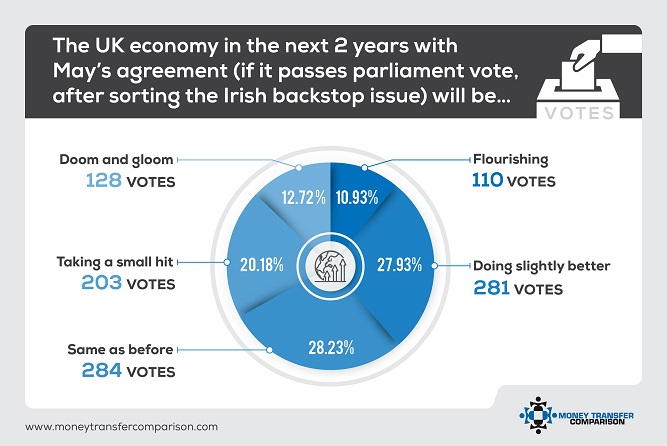 When comparing “Leave” voters with the sentiments of Brits more broadly, including those who voted to remain in the EU and those who didn’t vote at all, the results are less shocking, though striking nonetheless. As a whole, less than 7 percent of respondents felt that the British economy is likely to flourish in the next 2 years after Brexit. Moreso, even the chance of the economy doing “slightly better” still didn’t resonate with the majority of Brits with only 18 percent believing so.

Instead, the most popular responses by Brits were those expecting some sort of decline in the UK economy as a result. As much as 48 percent of responses saw the future of the economy over the next 2 years as suffering, with 23 percent of all those surveyed believing that “doom and gloom” is the correct description for the economy. 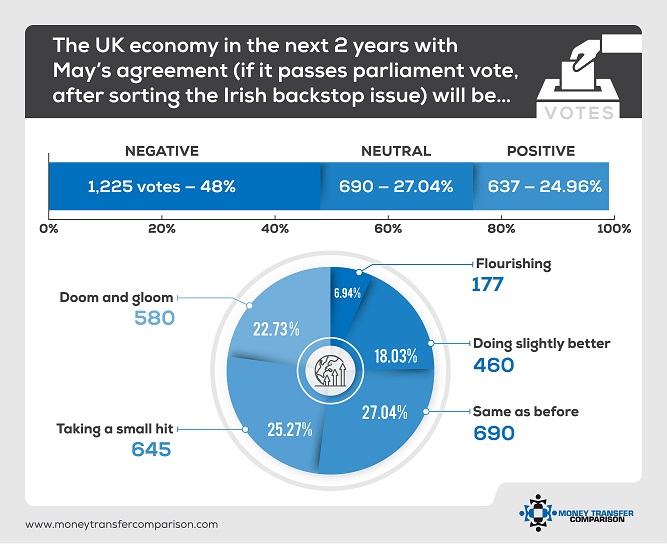 Deal or No Deal: What Difference Does it Make?

Not only do UK citizens believe that, as a whole, the economy is likely to suffer from Brexit, but the numbers are surprisingly similar regardless of whether the withdrawal is a “hard” Brexit or not. When it comes to seeing a small hit on the economy, 25 percent of those surveyed said they’d expect to see one with the passing of May’s agreement. Interestingly, that number is only slightly higher when participants were posed the same question but with a no-deal Brexit, where 26 percent felt that the economy would take at least a small hit in the next 2 years. 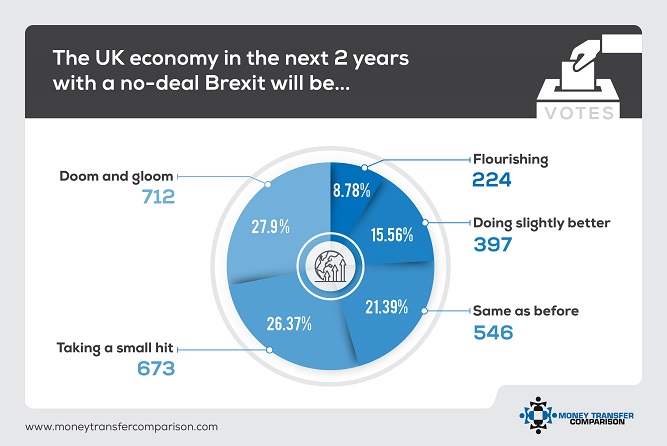 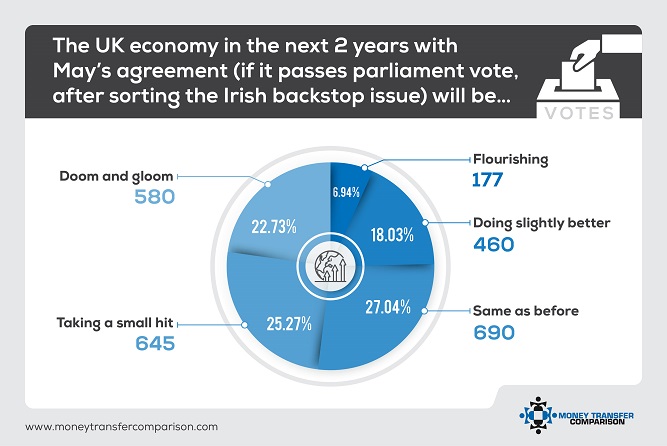 In the severe outcomes, such as describing the potential economic outlook as “doom and gloom,” there’s more similarity as well. Where those who would describe the outlook as “doom and gloom” with May’s agreement tallied 23 percent, that sentiment is only marginally larger in the event of a hard Brexit at 28 percent. Likewise, on the other end of the spectrum, those who feel that the UK’s economy is likely to “flourish” after Brexit are similar for both a deal or no-deal departure with 7 percent and 8.7 percent responding, respectively. When measuring the sentiment of average Brits, deal versus no-deal Brexit has surprisingly low impact on their feelings overall.

PM and Parliament Approval is Low

When it comes to how PM May and Parliament both handled the entire Brexit process, the data shows overwhelming similarities between both Leavers and Remainers — dissatisfaction. On both sides of the debate, more than half of all those surveyed believed PM May handled things poorly with just over 40 percent describing May’s handling as “very poorly in every aspect.” Furthermore, nearly 11.4 percent said they didn’t think May respected the people’s vote at all. That’s compared to a miniscule 6.3 percent of respondents who believed she handled things “extremely well.” 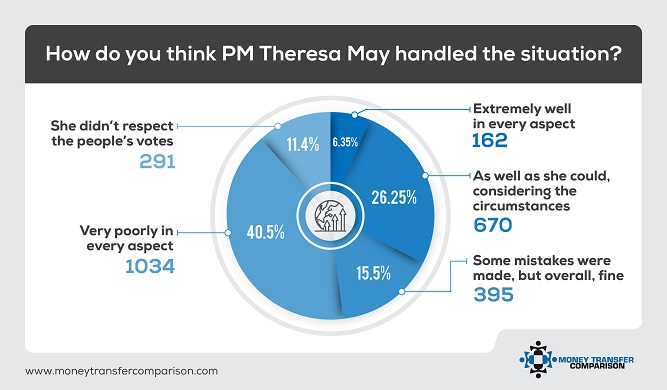 People seemed to cut Parliament more slack on the topic, though with the majority still left unsatisfied by the entire ordeal. Negative and positive responses to Parliament were closer to a 55/45 split overall, with 41.6 percent saying Parliament did not act well and shouldn’t have voted against a no-deal Brexit (along with an additional 14 percent saying they acted poorly and should have accepted May’s deal), but 33.4 percent commending Parliament on voting down a bad deal and the possibility of a no-deal EU departure. On the extreme side of things, only 10.5 percent believed Parliament “saved the nation from a disaster.”  Overall, responses from British citizens from across the spectrum illustrate dissatisfaction with officials, and PM May in particular. 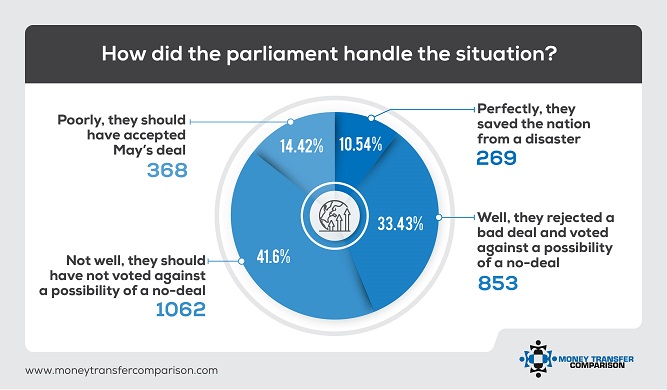 Brexit may be just on the horizon, and Brits may be feeling pessimistic about the future of the UK economy, but the global currency markets view the situation differently. In fact, sterling has been the single strongest year-to-date performer of all the major currencies so far with the pound up over 4 percent so far in 2019. GBP has been trading abnormally high, showing a significant disconnect between traders and the public sentiment of those using the GBP everyday. Furthermore, the Pound Sterling was very resilient in this period, and has been quick to recover from significant events that have taken place over the past 4 months.

Our survey demonstrates that across the UK, there is a grave concern as for what’s next for the economy, even among those who originally voted Leave on EU referendum, and the majority of economists share these concerns.

So why is the Pound Sterling still on the climb?

The explanation we can suggest is that the underlying reason for the relatively sudden improvement in the GBP rate against the EUR and the USD is based on the assumption that the odds for a no-deal Brexit are quite low, and furthermore, it is unlikely there would be a hard Brexit at all because that could send UK to a recession.

The above thesis essentially eliminates the unfavourable scenarios off the table, because it is assumed the UK will not go through with any solution that could make a significantly negative short and long term impact on its economy, but that theory has proven wrong from the very beginning of the Brexit process. There were very few economists who supported leaving the EU, and still, the people voted for it, and PM May and the parliament have decided to move “forward” with it (as much as you can call the current situation moving forward). To us, that signifies that at the end of the day, it’s not always about what economists think is the right choice at any given time, and a hard Brexit or a no-Brexit is more than feasible.

Even if you look at firms like Morgan Stanly, who called the Sterling “a strong buy” and said it is likely to be a soft Brexit just 10 day ago, you could spot they preparing a contingency plan for a no-deal brexit at the same time. Goldman Sacks has just raised the chances of a no-deal Brexit too.

Hence, we think that the reasonably high GBP rates may not last, and would recommend businesses and individuals who may need to exchange large sums of Sterling in the future to look into forward contracts, a hedging tool that will enable clients to lock today’s exchange rates for up to 48 months. It is offered by the top rated money transfer companies on this website.