How will the
Australian dollar
affect travel and
consumer
spending?

In the first three quarters of 2022, the Australian dollar experienced promising highs which caused the prices of overseas goods and services to become more affordable for Australians. However, in late September 2022 the dollar began falling against the USD and other currencies, only experiencing a gain against the New Zealand dollar.

Money Transfer Comparison commissioned an independent study of 1009 Australians to gauge how Australians will react to increases or decreases in the Australian dollar (AUD) against foreign currencies, including whether changes to the AUD will motivate them to commence, or forego, investing, traveling or spending overseas.

The survey respondents cover a geographical and population spread that is reflective of the Australian population.

If the Australian dollar continues to fall against other currencies over the next 12 months, will Australians avoid traveling, investing or spending overseas?

Money Transfer Comparison asked respondents whether they would avoid traveling, investing or spending money overseas if the Australian dollar continued falling against other currencies over the next 12 months. Two-thirds (62 per cent) of Australians would still travel overseas, two-thirds (63 per cent) would still purchase products overseas and almost three-quarters (71 per cent) would not avoid investing overseas, while 79 per cent would not avoid gifting or donating money overseas. However, almost two-thirds of respondents (61 per cent) would avoid spending overseas in at least one of these ways.

Money Transfer Comparison compared answers across the States. The overseas spending of South Australians is least likely to be impacted by AUD falls: 70 per cent of respondents in this State would still travel overseas in the next 12 months, even if the AUD falls. This compares with 67 per cent of NSW and WA respondents, 62 per cent of Victorians, 54 per cent of Queenslanders, and just 49 per cent of ACT respondents.

If the AUD falls against other currencies over the next 12 months, would this motivate you to avoid traveling, investing, or spending overseas? By State.

Money Transfer Comparison also compared answers across age groups. It found that the older the age group, the more likely they are to forego international travel if the AUD continued to fall. Forty-two (42) per cent of over-55s respondents are willing to give up overseas holidays, compared with just 37 per cent of 35-to-54- year-olds and 33 per cent of 18-to-34-year-olds. A higher proportion of respondents aged 18-24 would rather give up purchasing goods and services overseas. Similar proportions of all age groups would continue to aid charities and family overseas despite decreases in the value of the Australian dollar.

If the AUD fell against other currencies over the next 12 months, would this motivate you to avoid traveling, investing or spending overseas? By age. 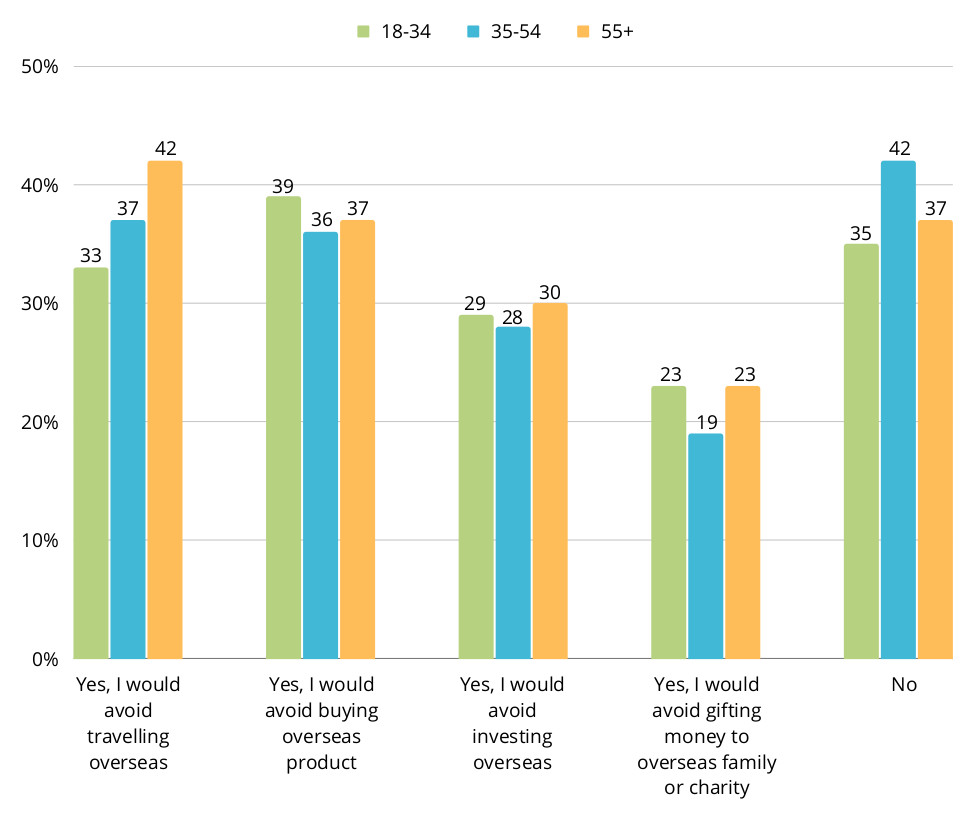 If the Australian dollar grows strongly against other currencies over the next 12 months, will Australians be motivated to travel, invest or spend overseas?

Money Transfer Comparison asked respondents whether they would be motivated to spend overseas, including on travel, or invest, if the AUD grew strongly against foreign currencies over the next 12 months.

The survey found that 70 per cent of Aussies will consider traveling overseas if the AUD grew in the international currency market. Almost half (45 per cent) of respondents indicated they would be motivated to buy overseas goods. One in five (20 per cent) respondents would be motivated to invest overseas, while 17 per cent would aid money to their overseas family or to foreign charities. Only 18 per cent noted that positive changes to the AUD would not propel them to alter their existing spending or investing habits. 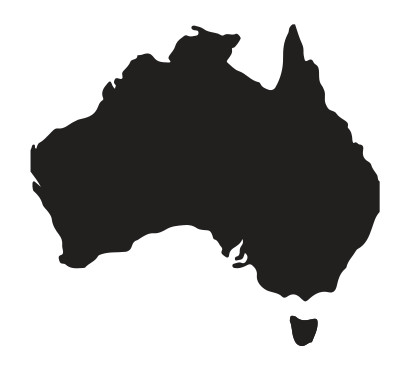 If the AUD continues to grow strongly against other currencies over the next 12 months, would this motivate you to travel, invest or spend overseas? By State.

Money Transfer Comparison compared responses across the States. It found that the majority of respondents across all states would consider traveling overseas if the AUD grew against foreign currencies. ACT respondents would be most motivated by a growth in the AUD, with 83 per cent indicating that they would travel overseas, and a further 56 per cent would purchase foreign goods. NSW respondents were similarly likely to make travel plans (73 per cent), followed by Victorians and Queenslanders at 72 per cent and 71 per cent respectively. Just over half of South Australians (57 per cent) noted that they would travel if the AUD remained high, while only 11 per cent would gift money to charities and family in this circumstance; this compares to a generous 33 per cent of residents living in the country’s capital State.

If the AUD continues to grow strongly against other currencies over the next 12 months, would this motivate you to travel, invest or spend overseas? By age.

Younger generations are more likely to take advantage of currency fluctuations, with more than 80 per cent of respondents aged 18-34 years indicating that they would take the opportunity to travel internationally, followed by 78 per cent of 35-to-54-year-olds. In contrast, just over half (55 per cent) of over-55s respondents would be more motivated to travel. Similarly, an equal 24 per cent of under-35s and 35-to-54-year-olds would consider investing overseas during an upturn of the national currency; this compares to just 12 per cent of over-55s, who belong perhaps to a financially risk-averse demographic. Unsurprisingly, over-55s spending appears to be least affected by currency fluctuations, with 34 per cent contending that they would not be further motivated to travel, invest or spend their money overseas. Decades of accumulated savings and higher annual income are likely reasons for their unaffected spending as this age group is more likely to have greater purchasing and investing power, regardless of the AUD’s strength. 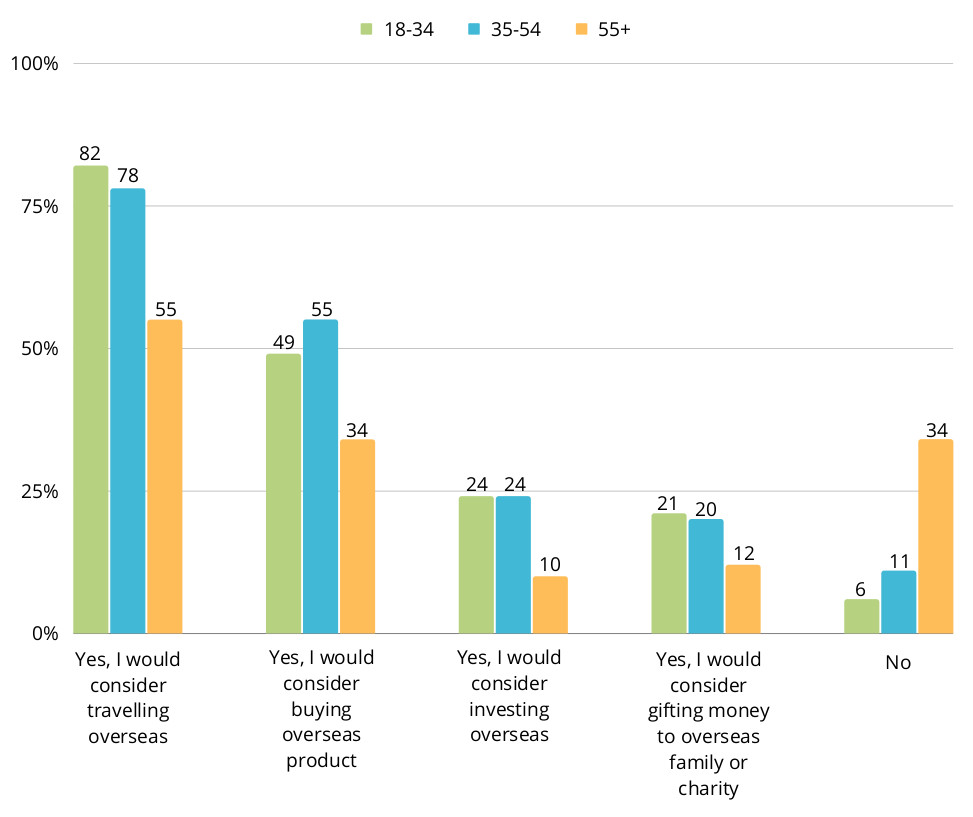