With our selection of best money transfer companies in Australia, you can

Traditionally, international money transfer services in Australia and globally have been more focused on SME clients and prior to 2010 most of them did not accept individual clients at all. Nowadays, all the best international money transfer service providers in Australia are happy to accept individuals, with the exception of B2B provider WorldFirst – each with a different minimum transfer amount (CurrencyFair and Wise don’t have a minimum amount, true for October 2022).

With the above, being said, Australian SME clients are still extremely lucrative for money transfer companies. These are normally repeating and loyal customers who make a lot of transactions. There’s also a very large of customers, relatively to the population’s size. Australia is known for its 4m small businesses but for foreign exchange companies in Australia, the biggest kicker is this – 68% of all Australian online businesses sell internationally. A small online seller in Australia which is selling merchandise for a modest amount of $50,000 AUD abroad, and additionally pays international suppliers an amount of $50,000 AUD each year, can pay anywhere from 2.5% to 5% in international transfer bank fees with Australian banks like ANZ, Westpac, CBA, NAB or Bendigo; this is where international money transfer services are able to really shine and not only offer tremendous savings (WorldFirst fees range between 0.15% and 0.5% in comparison) but also added values sophisticated international payment platforms, Forward Contracts and other forms of hedging, and above all 1 on 1 guidance by experts.

All Money Transfer Companies in Australia Covered by MoneyTransferComparison

Why Australia is the World’s #2 International Money Transfer Hub?

Only second to UK’s currency transfer brokers, Australia is a massive international hub for international money transfer companies. That is particularly impressive considering Australia’s population being a mere 25m people, which is under 0.33% of the global population. So what makes Down Under so attractive in the eyes of money transfer services specializing on international transfers? the reason is multi-faceted.

i.e. clients who transfer money from UK to Australia as well as those transferring money from Australia to UK are very much ordinary customers for the companies we listed as the best international money transfer in Australia. The onboard is easy for both Brits and Aussies.

Money Transfer Comparison commissioned an independent survey of 625 Australians who havef amily overseas to gauge whether they plan to help them financially, despite the rising cost of living.Respondents were asked to select the type of help they were willing to provide, including transferring money internationally, paying bills, or sending gifts. Respondents were also asked how much money they would send over the next two years if their families required assistance. The survey respondents cover a geographical and population spread that is reflective of the Australian population.

Below are the results:

As inflation soars in Australia, will you do any of the following when making payments in the next 12 months, to save money?

As US Dollar surges, will this impact your travel, overseas investing and remittances plans for next year?

Australian expectations for international money transfers in 2023 vs 2022 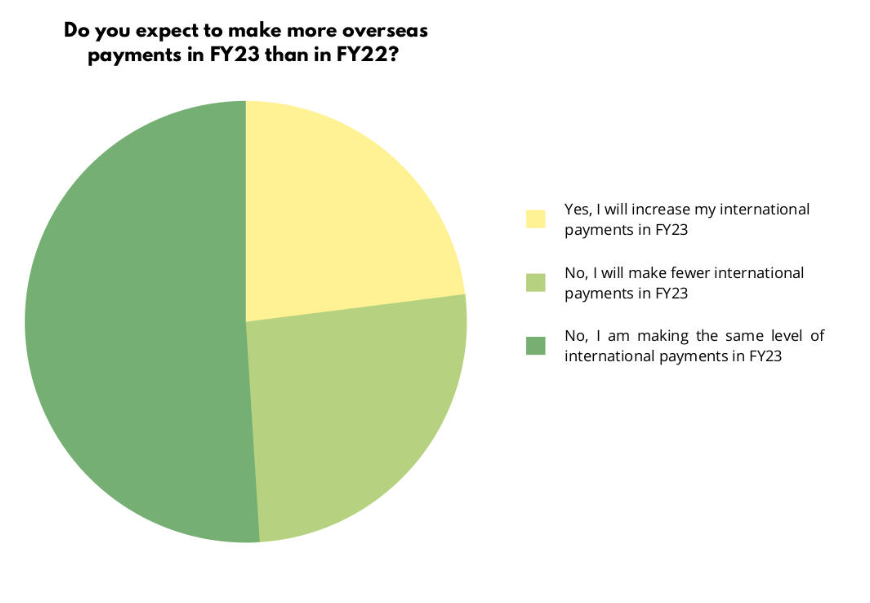 View Study: Will Australians increase their international payments in FY23?

We have been featured in the following publications: 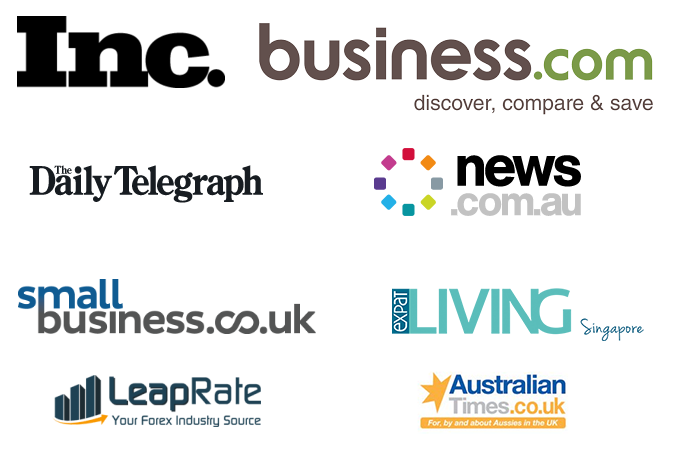 Which Are the Best International Money Transfer Companies in Australia

Our Review and Comparison Guidelines Explained


We have compared more than 60 companies of which 13 are able to onboard Australia customers as per June 17, 2021.

Straightforward answers from your representative.
Your money is in segregated bank accounts and you are not exposed to losing it .
You understand precisely which fees are involved and the other party knows how much money it will receive.
The staff will be able to provide guidance about the best timing to exchange the Australian dollar.
The service won’t be pushy and won’t try to persuade you to trade today at a worse rate than competitors.
You could DIY or have a representative on telephone or email to help you conduct your trade.

Takes long to sign up, have to come up with a lot of documents.
Not properly regulated and client funds are not separated from the company’s.
Money transfer fees and exchange rates are opaque.
There will be no one to guide you how to conduct the transfer, nor on whether this is the best timing to conduct such a transfer. No hedging tools will be offered.
Even if you transfer large amounts that will be no discount, and you will pay the default rates
A money transfer company that wants you to fax your details is definitely one to avoid. It signifies it has not kept up with progress.
View The Best Rated Money Transfer Companies

Money Transfer Companies in Australia – The History and The Now

Australia were a little slow to wake up to it, the US are still way behind on it and the UK has led the charge on it. What are we talking about? Specialised international money transfer companies of course. Bringing a breadth of new payment options with little to no fees and considerably better currency exchange rates. There are now more money transfer companies in Australia than ever before, joining the original innovator OFX (previously OzForex).

Australian FX Companies – Where Did it Start?

Whilst we might say Australia have been behind the curve OFX was actually founded in 1998 as one of the first dedicated international money transfer companies to ever exist. Today it’s had over one million customers and traded over $150b AUD for its clients. So why has it proved so popular and, like many other Australian FX companies, still remained a relative unknown in Australia?

It’s difficult to pinpoint exactly why, but when we consider the UK had at least 10 dedicated money transfer companies launching in the 1990’s and 2000’s and they still only had around 5% of the whole UK international money transfer market at the time then we can probably see why OFX might not have been a household name. The rest of the UK market belonged to 4 big banks (read about the current state of affairs in the UK banks join the money money transfer race). Sound familiar? That’s because it’s been much the same story in Australia.

Are We Seeing a Shift To More Money Transfer Companies in Australia and Why?

So what’s changed and why has the mentality shifted away from banks and towards international money transfer companies in Australia? Part of it has to be that people have come around to the idea of managing their finances online or even through their mobile. Just as we use mobile banking these days we know there are a number of new innovative solutions challenging the big banks that provide us with more functionality at a reduced cost. It may feel longer but let’s not forget the first iPhone was only announced in 2007 and things have only moved faster the more time progresses. 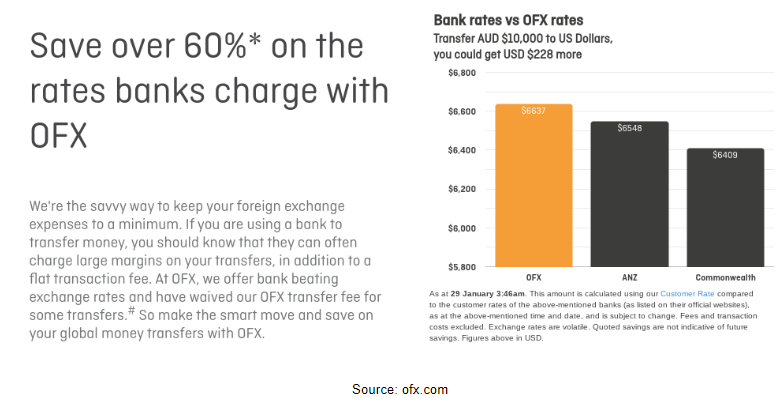 There are a number of other reasons to use an Australian FX company as well of course. Looking at the infographic above, based on rates taken 29 January 2020, customers will receive more in their destination currency when using OFX vs both ANZ and Commonwealth Bank. In fact, when using an Australian bank, your currency exchange spread can be as much as 5% worse than the current interbank rate (the rate at which banks trade currencies with each other).

So let’s say you were making an international money transfer from Australia to UK of $1000 that would be $50 taken in the margin by the bank.

International payment fees are also likely to be between $10-$30 with an Australian bank whilst most Australian FX companies will charge no payment fees.
We won’t touch on the availability of payment and hedging solutions with money transfer companies in Australia compared to banks, as we cover this in our other resources. But suffice to say forward contracts, batch payments, regular transfers, swaps and limit orders will not be available with your bank are are so with dedicated Australian FX companies. Helping you achieve your desired exchange rate which can have a huge impact on the amount you receive.

Nowadays there are a whole host of other providers to have launched as money transfer companies in Australia. UK headquartered WorldFirst were the first international company to launch in Sydney in 2009 and they clearly detail their pricing matrix online (perhaps the cheapest of all Australian FX companies) which is dependent on the annual AUD volumes you are trading, whether as an individual or business. UK based TorFX then launched in 2013 and has been a mainstay ever since.

One of the main use cases for Australian abroad to make payments to Australia would be to pay the ATO. All Australian residents must report and pay for income generated also outside of Australia. International money transfers with a debit or credit card from abroad to cover those sometimes meaningful sums can be very expensive, and so is using banks, and hence they use international money transfer companies to make such transfers. OFX has a unique offering in that regards covered here – paying the ATO from overseas.

There is a significant selection available to those in Australia, individuals or businesses, who are looking for a reliable money transfer service which will allow them to transfer money internationally for cheap to and from Australia. We have included 5 of the top known money transfer companies in Australia on our list, but there are additional foreign currency providers out there – while some of those companies could be highly reliable and good it is important to follow through on the three golden rules: